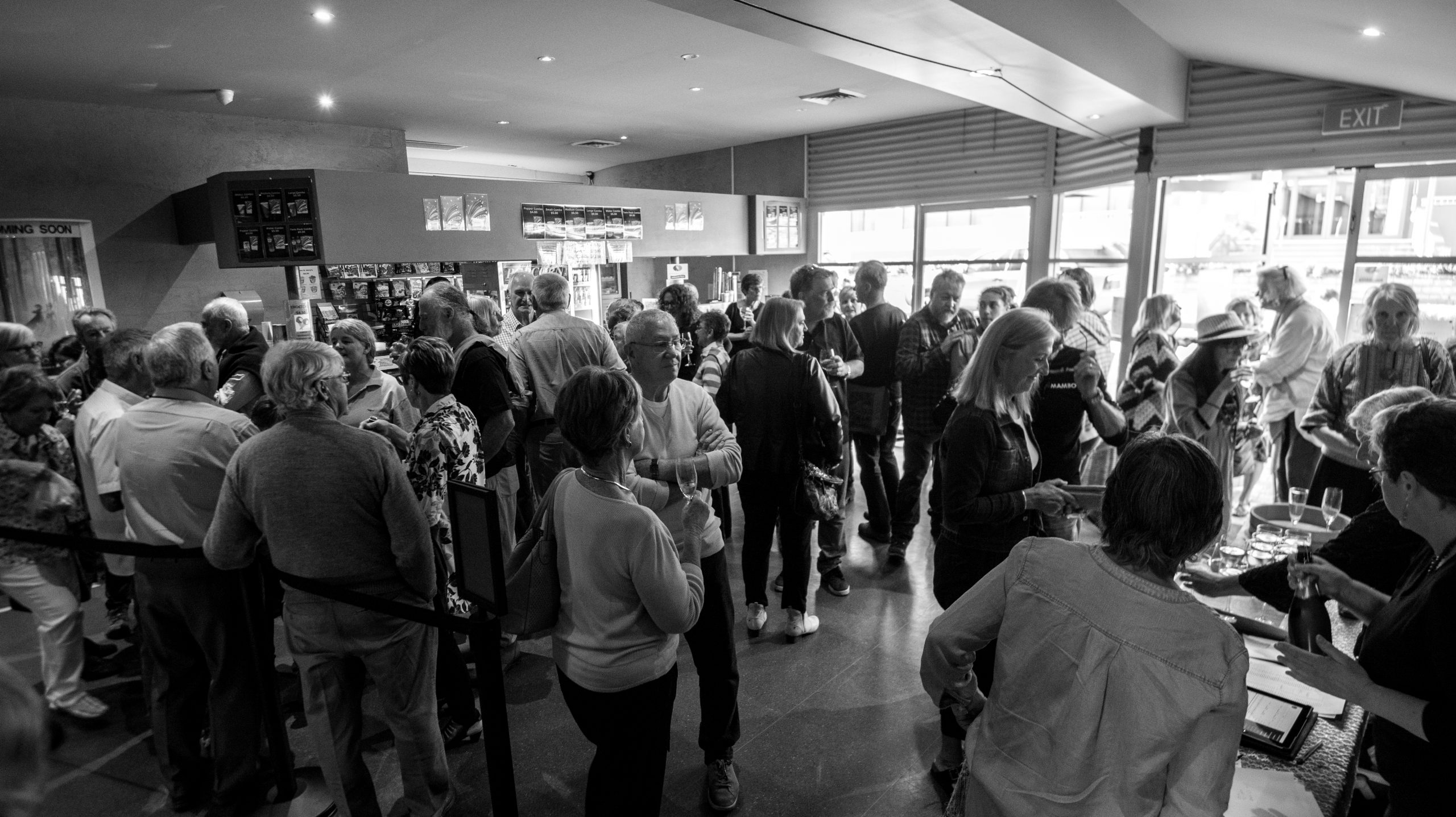 We were delighted at the turn out for our first special screening night on 21 October at the Picture Show Man Cinema in Merimbula. Over a hundred people from as far north as Bermagui and south past Mallacoota attended the evening.

The audience was a diverse group and enjoyed mingling in the foyer with their bubbles upon arrival.

The screening began with three shorts made by local filmmakers – Mirror & Me: made by the Girls in Media team with funding from the Bega Women’s Resource Centre and Bega Valley Shire Council. A group of six girls work-shopped the issues of bullying and self-esteem over a weekend and all participated in making the film under the excellent guidance of Lis Shelley from StageFlight, Pambula.

At the Rainbow Wave Festival held in April, Lis Shelley and Hiromi Matsuoka were filming the event when they met local drag queen Elijah Mortlock / Alesha Zamann. The preview of their documentary Dairy Queen showed Elijah’s efforts to become the Bega Valley’s premiere Drag Queen and quest for increased acceptance and awareness of the LGBTQI+ community in the region.

Bega writer/director Patrick O’Halloran’s The Shallows starring Luca Yi and Jamie Forbes was a tale with a twist about a man, a boat and a boy. Beautifully shot at Blackfellows Lagoon in Kalaru by DOP Chris Sheedy, edited by Isabel Darling of Torchlight Media, Batemans Bay and scored by musician and composer Andrew Gray from Tanja, the short was a showcase of local filmmaking talent.

BVSC Councillor Cathy Griff has a background in the film industry, having worked for the then Film Finance Corporation, now amalgamated into Screen Australia. She spoke about women in film and applauded the efforts of young people in the area having a voice through film, inviting them onstage for a Q&A session. Actors and filmmakers Jada Koeck and Amalia Grace Thompson from Mirror and Me, actor Luca Yi from The Shallows and Elijah Mortlock from Dairy Queen spoke of their positive experiences performing and being involved in filmmaking. Their presence certainly created a buzz in the audience.

The feature film Ride Like A Girl directed by Rachel Griffiths and starring Teresa Palmer and Sam Neil is the story of a girl making good in the male dominated jockey profession and overcoming incredible odds to realize her dream of winning the Melbourne Cup. Rachel Griffith’s feature film directorial debut was impressive.

The evening gave patrons a taste of what’s to come from Far South Film as we plan for our Film Festival on 23 August 2020. More special screening nights are on the cards between now and the Film Festival next year. These nights showcase our local filmmakers and Australian film, whilst raising funds for the Film Festival.

Join SPA CEO Matthew Deaner in conversation with Grainne Brunsdon, Head of Screen NSW, for a live discussion of how the lockdown in Greater Sydney is affecting local production businesses, and the support that is available. 1pm tomorrow 28/07/21 FB live - ... See MoreSee Less

📯 Sound the horns! The call for entries for Berlinale Talents 2022 is open! 📯 Emerging filmmakers and series creators from around the world, we wholeheartedly invite you to apply! Get to work on those applications, you have until September 1, 2021! Spread the news!
For all the information you need: bit.ly/HowToApplyBT2022 ... See MoreSee Less

Wasted communication, this assumes people know what it is about, you need to go 4 pages deep to "what is" page and even then it is ambiguous.