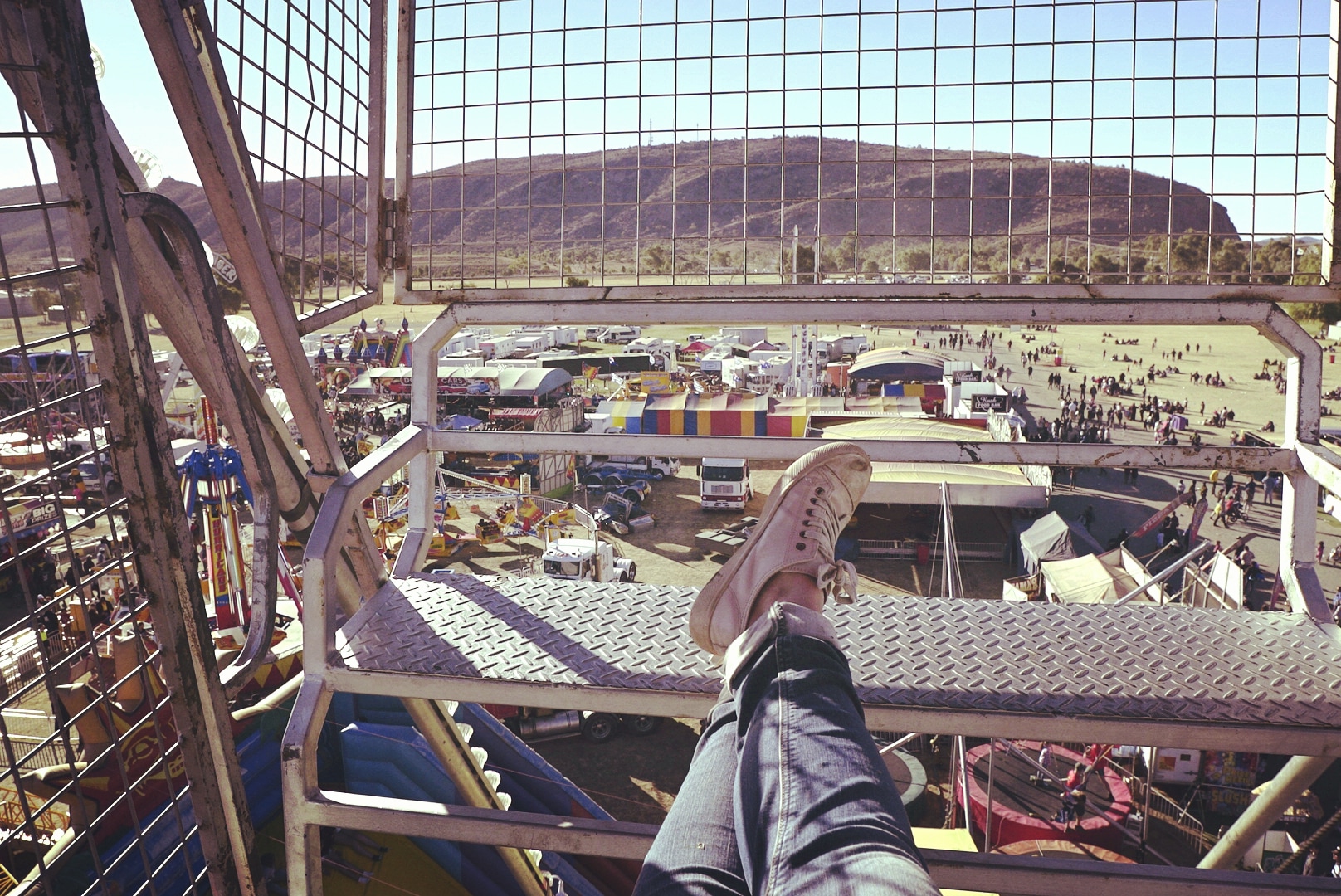 Like many of us who live and work in the regions, Torchlight Media’s Isabel Darling usually works on her own and wears many hats – she produces, directs, shoots, edits and delivers on her own. Behind all her corporate projects, Isabel has had an on-going passion project which I first caught a glimpse of at South East Arts’ Screen Day in March 2018.

The short film was called “Manfred Da Vinci, Ride Painter” and told the story of Manfred, who painted the rides for the Bell Family Carnival, who are based in Queanbeyan but travel all over Australia. I loved the short for its colour and visuals, and for the insight into the characters of a culture that is an important part of Australian life, particularly in the regions, but also very much at the fringes of it.

At a subsequent meeting Isabel showed us the seeds of a longer, feature-length documentary on the Bell family called “In for the Ride.”

She then was selected to present “In for the Ride” as a finalist at Vice’s Pitch Australiana 2018. Unfortunately she lost out to Dylan Blowen’s pitch, “Shooting Cats” – but more on Dylan later.

In a noisy pub on Melbourne Cup Day, Far South Film caught up with Isabel about her experience of the “ride” this year.

In August 2019 Isabel was one of twelve regionally-based directors selected to be part of Screenworks’ Directing Intensive, held over a weekend at the Linnaeus Estate in Byron Bay.

In the spirit of the self-reliant, self-sufficient  regional creative, the ultimate DIY-er, Isabel had thrown herself into the process of creating her first feature-length film:

I mean, like this feeling of control. I was… I convinced myself that this project… it was going to be the ultimate baby. The only thing I’d ever have full control of.”

I’ve always known that filmmaking is collaborative, but I really just went into a regional headspace of, there’s no one near me, I don’t even know how to get a producer, I just I don’t know where to go. I don’t know who to turn to, it’s all too hard.

So feeling stuck, with miles of story post-it notes stuck on her office wall and multiple versions of what she thought might be a rough cut, Isabel landed at the Directing Intensive, organised by Screenworks in the Northern Rivers region of NSW.

“And that was where Kriv Stenders and Rachel Landers were like – “Stop what you’re doing.” And I was like, “Oh, should I keep editing?” …“Stop editing.” They hadn’t even seen the rough cut. They were like – “Put it down. You can’t do everything, you can’t be all of it.“

“And it was almost like instantly this weight was like, ahh… It lifted because I didn’t have all that pressure on me any more, because the pressure I was feeling to finish this doco edit was so insane because I was trying to squeeze it in with normal life.”

“And I’ve never done it. Never cut a feature-length anything. Never cut anything longer than 15 minutes. Or half an hour. You know. And that’s corporate stuff. “

As a result of Rachel Lander’s mentoring at the intensive, Isabel found a collaborator in Producer Dylan Blowen, who ironically had pipped her at the Vice Australiana pitch the year before.

“It’s been an incredible learning curve. And now that I am collaborating, it’s so good having Dylan on. He knows how to do all the producer, financing stuff and cause he’s busy as well he just kind of goes off and develops what he needs to do and, you know, he sort of has just taken over in terms of what we need to do and where we need to go.”

Then in October “In for the Ride” was selected for Antenna DocLab 2019.

DocLab is a relatively new initiative of the Antenna Documentary Festival, where the creative teams of three feature-length works at rough-cut stage are selected to attend a one-day intensive “designed to help filmmakers finish their films to the best of their creative potential and to find new pathways to reach global audiences.“

At DocLab, Isabel made some great connections with other well regarded filmmakers and film festival directors, getting some positive feedback and a lot of interest. But the crux of the day was facing the panel of international expert mentors: Anne Köhncke, co-founder of Final Cut for Real (Denmark), Orly Ravid from The Film Collaborative (USA), Kellen Quinn (Producer, Midnight Family), Rachel Leah Jones (USA, Producer/Director Advocate) and Simon Price (Australia, Editor).

They all asked some very hard questions about the films, and Isabel realised that she was not the only one struggling with storyline and development. The other filmmakers had similar stories of being too close to their subjects and being a bit ‘tangled’ in the production of it all.

You know, accomplished filmmakers from around the world really saying, well, how about this? Why isn’t this?

“They ripped us to shreds, in a  really productive way… they just took it apart. It was good. It was good to hear what each mentor was interested in. They each connected to a different character.”

And Simon Price said at the end of the day, you’ve got to make the film you want to make. Which is really hard to hear, and you’re like… I’ve been trying, all these years. But it’s true. You know, it can’t be everything to everyone all at once.

Ultimately it has to be the film that I’m going to make as the director and also really, really realising now that I have to keep collaborating. I can’t ever do what I did, which is, you know, I sit in a dark room all alone showing my partner…

“Pretty much as it stands, the whole rough cut doesn’t exist. We went into the DocLab saying, look, we’re probably going for production funding – but this rough cut isn’t something that’s going to be extended. It’s all going to be pulled apart, restructured.

I feel like since that Byron Bay workshop, it was just something in me that needed someone to force me to click over into not being controlling of it all.

It’s like I flipped a switch. Yeah. So I’m actually really looking forward to the next phase. We press forward with story development, funding applications and then more filming.

And just as this is going to press, we have news that Isabel has now been selected to take part in Screenwork’s 2020 Director Pathways Program. The ride continues…